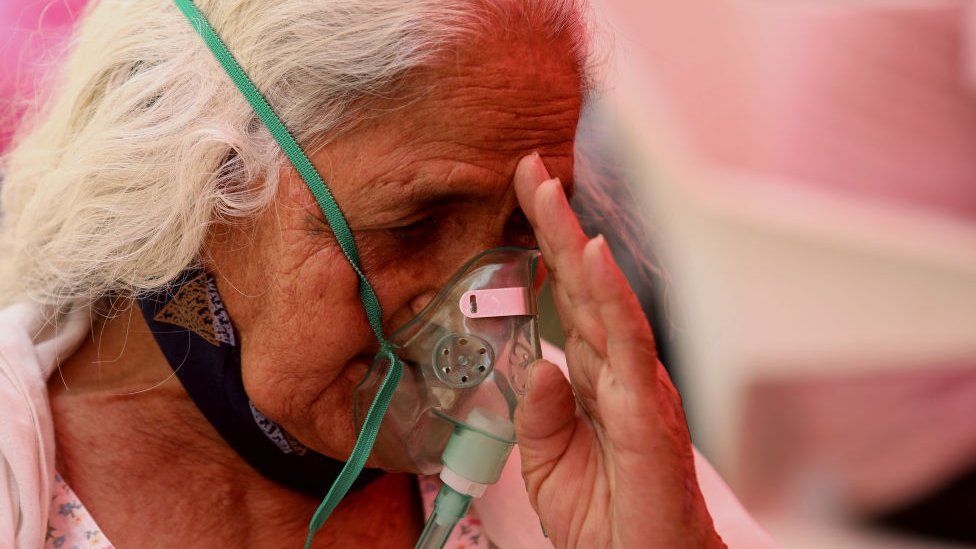 Hospitals in Delhi continued to send desperate messages for emergency oxygen supplies through the night on Sunday, warning that patients are at risk.

The crisis started two weeks ago but shows no signs of abating.

At least 12 patients, including a doctor, died when a prominent hospital ran out of oxygen on Saturday. Outside hospitals, families of patients who can't find a bed are struggling to get hold of portable cylinders - sometimes standing in queues for up to 12 hours.

Several big hospitals in Delhi are relying on daily oxygen supplies but they are not getting enough to keep some as backup in case of emergency.

One doctor described the situation as frightening, explaining: "Once you've used up your main tank, there is nothing to fall back on."

The situation is worse still in small hospitals that don't have storage tanks and have to rely on big cylinders.

And the oxygen crisis comes as coronavirus cases continue to surge.

India, meanwhile, over the weekend recorded its highest daily coronavirus death toll since the pandemic began, and became the first country to register more than 400,000 new cases in a single day.

'It's a battle every day'

Dr Gautam Singh, who runs the Shri Ram Singh hospital, says he has 50 Covid beds and space for 16 ICU patients, but has had to refuse admissions as there is no guarantee of oxygen supply.

"It's a battle we are fighting every day," he says. "Half of my hospital staff are on the road with cylinders to get them filled every day, going from one place to another."

He has put out a number of SOS calls in the past few days, getting oxygen just in time to avoid disaster.

Dr Singh says the possibility of patients dying without oxygen in the hospital stops him from sleeping.

"I should be concentrating on treating my patients, and not running around to get oxygen," he says.

Other hospital owners are also facing the same ordeal.

One woman whose family runs a hospital in Delhi says there was no coordination among the authorities when the crisis started.

"For those few days, we had no idea who was the relevant person to contact and who had the authority to resolve the issue," she recalls.

She says the situation is "slightly better now" but there is still uncertainty over the supply which is affecting their ability to admit more patients.

"Each time someone reaches out asking if I have a lead for an oxygen bed, I feel terrible saying no because I don't." 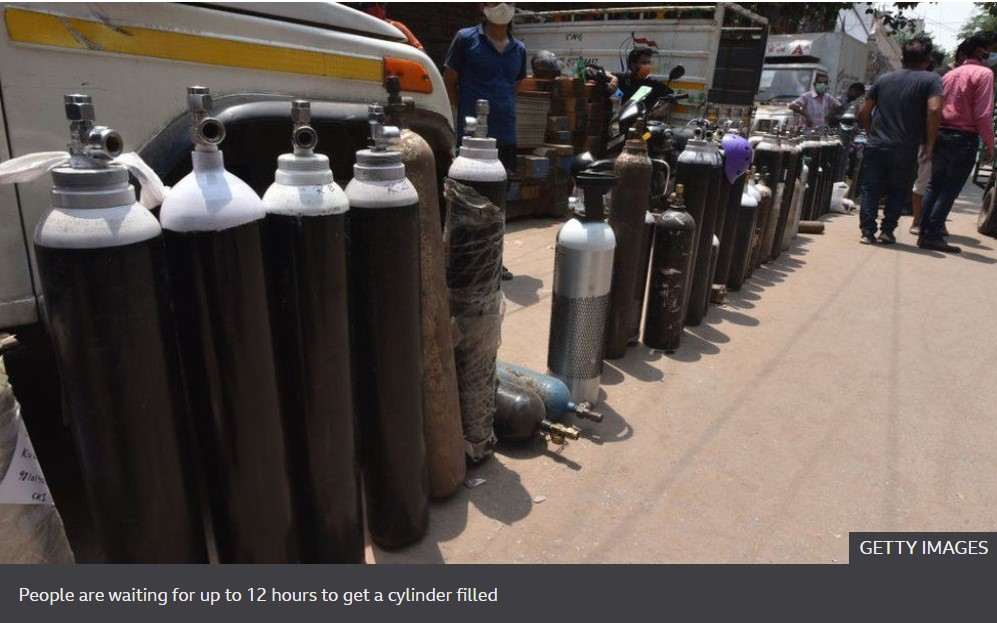 SOS calls from hospitals, particularly small ones that rely on cylinders and don't have a storage tank, come almost every day.

Delhi Chief Minister Arvind Kejriwal has repeatedly said that the city was not getting enough oxygen from the federal government, which allocates oxygen quotas to states.

Federal officials say there is no shortage of oxygen, but that the challenge has come from transportation. 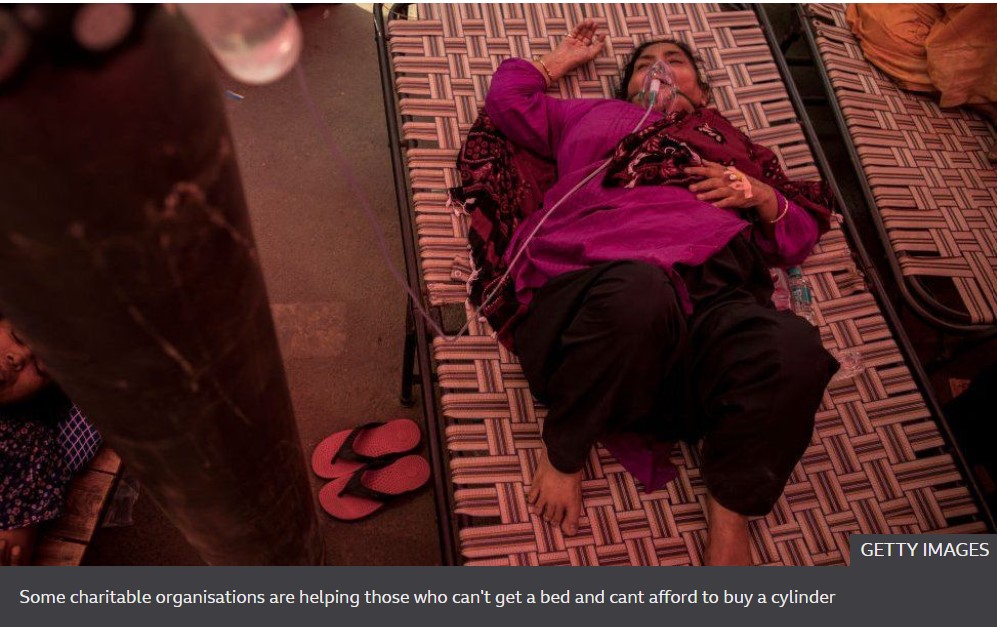 "You [the government] have to arrange everything now. You have made the allocations. You have to fulfil it," it said.

'People are paying the price'

But the situation on the ground is still dire.

"People are paying a price for the political wrangling between the state and federal government. Sometimes the price is their life," one analyst said.

Families who have managed to find a bed are also under extreme stress because of the uncertainty over oxygen supplies.

The last 48 hours have been excruciating for Altaf Shamsi.

He and his entire family tested positive for Covid-19 last week.

His pregnant wife became seriously ill and had to be moved to a hospital where she gave birth to a girl on Friday. A few hours after a complicated birth, she had to be put on a ventilator, where she remains in a critical condition.

Altaf was then told that his father had died in another hospital, while at the same time the hospital where his wife and baby are in an ICU said it was running out of oxygen.

The hospital eventually got a day's worth of emergency supply, but Altaf is worried about issues arising again.

"Who knows what will happen tomorrow?" he says.

And in addition to concerns over oxygen, the hospital has been asking him to move his wife to another facility, saying they do not have sufficient staffing.

It means he has been left to monitor his wife's oxygen levels and fever.

"You can't even imagine the pain I am going through," he says.

'My father was running out of oxygen'

Portable oxygen cylinders are the only way for patients in a serious condition to keep breathing at home when they can't find a hospital bed - a major issue in Delhi.

Abhishek Sharma's father's oxygen levels started dropping on Saturday. He rushed to the market to get him a cylinder.

After going to more than a dozen shops, he found a small cylinder which was good enough to last just six hours. He later went out and paid $944 (£683) to buy a big cylinder but it was empty. He took it to several filling stations but only one was willing to help and the queue was very long. 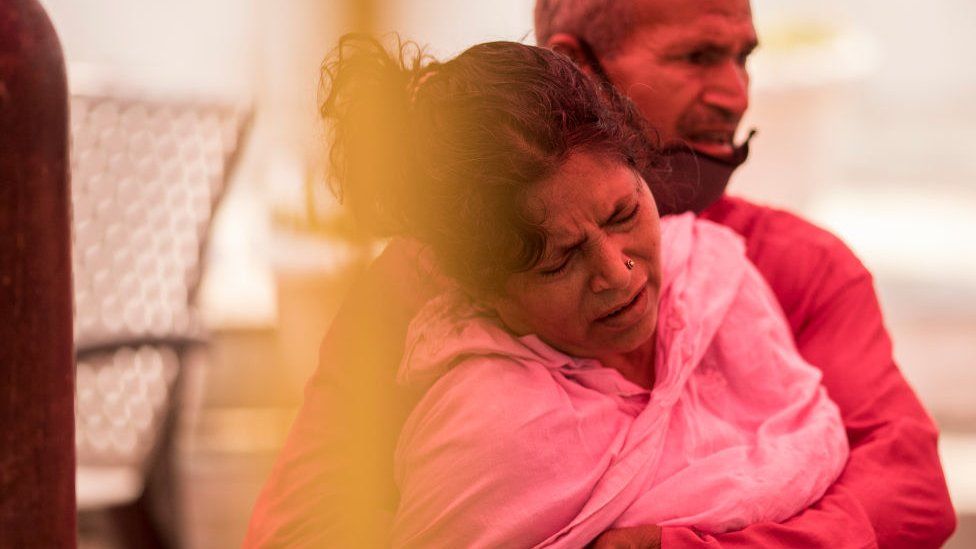 "With each passing minute in the queue, my father was running out of oxygen. I couldn't ask anybody to let me jump the queue as everybody was in the same situation. I got the cylinder refilled after six hours in the line, but tomorrow I will have to do the same again," he says.

"I shudder to think what will happen if I am not able to get the cylinder refilled."

Public policy and health systems expert Dr Chandrakant Lahariya says the government had been warning about "the potential crisis" but did not take any action.

A parliamentary standing committee on health warned about inadequate supply of oxygen and "grossly inadequate" government hospital beds in November.

Dr Lahariya says the medical oxygen crisis in India was caused by a lack of planning in fixing the distribution and transportation networks.

But many are shocked that two weeks after the crisis began, patients in India's capital are still gasping for breath, and there seems to be no end in sight.

'We have set up a war room'

In the face of the crisis, concerned citizens have been stepping in to help out those in distress.

Mr Poonawalla has been helping small hospitals when they are about to run out of oxygen. He says he is "connecting those in need with those who are in a position to help".

"We have set up a war room where a small team is working with me. I am just calling up people who I know - some of whom are in other states but are eager to help," he says. 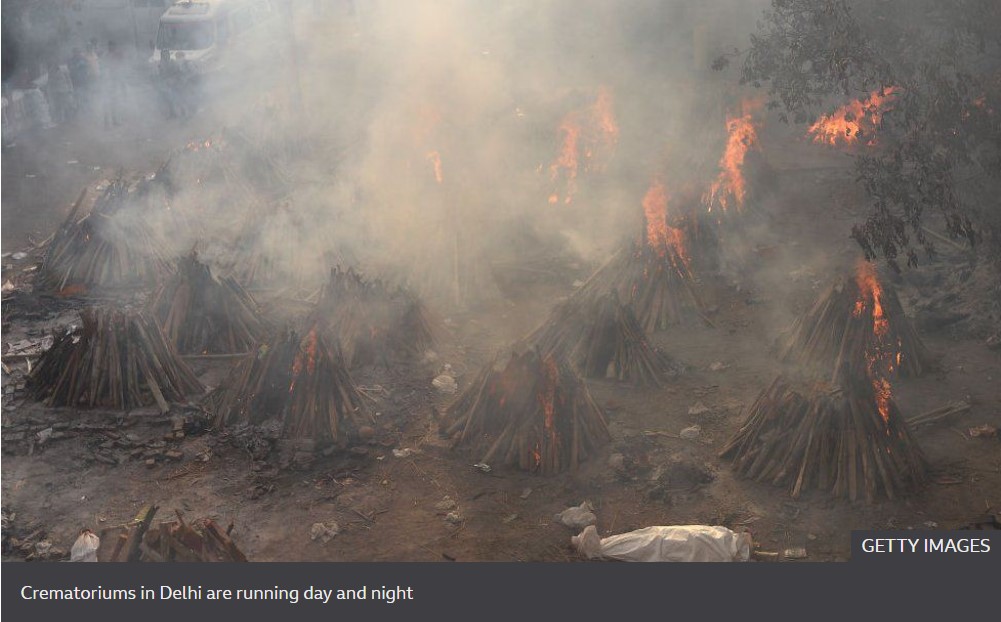 But he says "the situation is becoming more dire with each passing day".

"The government needs to step in and take charge because people like me don't have infinite resources to help every person or hospital in need."

The woman whose family runs a hospital in Delhi echoed these concerns.

"I can't sleep at nights thinking that those people who died because of a lack of oxygen could have been saved. Many of them have families, some have small children. How will we ever explain to them what happened when they grow up and ask questions?"